While googling on where to go in Ipoh town, we stumbled across a newspaper article of the ‘First Chinese Muslim Mosque in Perak’ which was recently completed in September 2013. As we had reached our afternoon prayers time, we decided to make a stop there in order to perform our prayers. So, here we go! This unique little mosque is located in Taman Tasek Jaya, Ipoh. How does it all started? Masjid Muhammadiah has its origin from a small ‘surau’ which was built-in the 80’s and this was a brain child of Allahyarham Tuan Haji Abdul Latif bin Haji Mohd Kassim and the early residents of the neighbourhood too. What makes us so impressed is that we spotted a multi racial community stopping by just to snap a photos in front of the building. From Chinese, Indian, Malay even Bangladesh and Nepalese too. In a way, we could see that it already emerged as an important tourist attraction for all races, including the non-muslims.

In order to successfully convey the image of the ‘First Ever Chinese Muslim Mosque in Perak’, the mosque was built with a complete Chinese architectural design. The roof tiles were imported all the way from the Land of China, whilst the assembly of the roof was supervised by a specialist technician from China too. As mentioned by the Management, the primary objective of having this architectural design is to make it clear to our multi racial society that Islam does not prohibit the cultural practice of any particular race provided that the cultural practice does not conflict with Islamic teachings, just as Islam does not prevent anyone to excel in their own language and culture respectively.

Yes, this town is made for walking! You can leisurely stroll along the historical buildings with colonial architecture and the pre World War II which took about 2 -3 hours of your time. A self guided tour is possible with the helpful map. We managed to visit only a few of it as we’re running out of time. 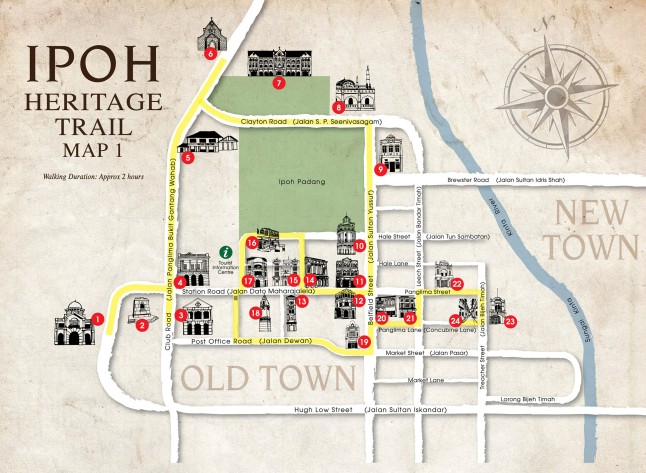 If you intend to do this, put on your most comfortable sneakers on and your most trusted sunblock. And now, you’re ready for it!

As we had our mouthful breakfast at Medan Selera Dato Sagor, we basically kick off our heritage trail from there. So, our first pit stop is definitely the Ipoh Town Hall and Old Post Office.

The most iconic building in Ipoh which is the Ipoh Railway Station. Those days in the past, it is known as the Taj Mahal of Ipoh and it houses the hotel called the Majestic Hotel. When we were there, it was sad to see that the hotel was no more in operation. In fact, half of the building was left unattended and was not properly maintained. It was such a waste!

Next spot are the Birch Memorial Clock Tower, standing just in front of Ipoh State Mosque. This memorial tower was built dedicated to the first British Resident in Perak, J.W.W Birch. He was killed in Pasir Salak by a group of Malay way back in the year of 1875.  In the ancient stories, it was told that Mr. Birch was such an arrogant man and showed no mutual respect and sensitivity towards the local customs and religions.

Right after that, we randomly walked and spotted the Straits Trading Building (OCBC), The Standard Chartered Bank, Perak Hydro Building which is now used by Tenaga Nasional Berhad (TNB) and many mores. But what attracted us was the art work near to Jalan Dato’ Maharajalela. We ended up heritage trail and walked back to our car near to Medan Selera Dato Sagor. Penat gak lar. 😀

Next was Pasar Karat! Yes, Pasar Karat Ipoh or formerly known as Pasar Loken located at Jalan Horley. The market started as early as 7.00am till afternoon. You can find almost everything from the olden days. ALMOST everything! The next things that we knew is that we keep reminding and talking to each other that ‘I used to have that’, ‘this is what we had masa kecik kecik’, ‘macam pernah tengok jek kat rumah Atuk and Nenek dulu?’ and all kind of statements and questions that popped out from our mouth. It was like walking through the time machine and going back to the old days. Everything was so VINTAGE & RARE. It come to the extend that you never thought that you will find those stuff there at the market. But they look very differently as everything are so valuable.

The portrait on the right is kind of scary. The eyes especially.

We spent so much time here as FF’s is really into the Volkswagen Station Wagon Model.

That Volvo grills reminded me of Arwah Ayah car.

In overall, Ipoh is definitely a place if you want to run from the city area just to get a short getaway over the weekend. Explore and discover yourself!