Today is definitely the day where we spent most of our time on the motorbike that we have rent from this beautiful lady, Itha. She’s basically running a motorbike rental business together with her dad in the land of Bali at a very ‘ridiculous’ price. Reason why I put it as ridiculous? She only charged us IDR35K which cost us average of RM10 only! This come with a complete set of fold umbrella, raincoat, helmet and a ‘sarong’ just in case that we need to wear it at certain temples. A total complete package for us with a very low cost as it can be. We managed to secure the booking while we’re still in Malaysia as we got to know her via Twitter. Since then, we exchanged number and the rest is all history.

Early in the morning, we checked our brand new motorbike and settled the rental agreement with her. The plan of the day came out after we spark our conversation with her, 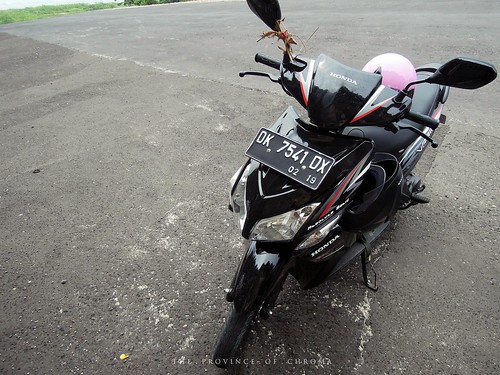 Itha and Putri basically told us where they are heading too and we basically followed them without any argument at all. We very much depend on them. CLUELESS, that the most suitable adjective that really defined us at that point of time.

After passing through the morning traffic in the island of Bali, we then reached Garuda Wishnu Kechana (GWK) Cultural Park. The main attraction here is basically the statue Wisnu and Garuda beside of other supporting facilities such as Lotus Pond, Festival Park, the Amphitheater and etc. As for us, we got attracted with the limestone pillars surrounded around the open space area of Lotus Pond. It was really a nice set! While walking from one end to another end, we imagined how great it would be if it could hold an event which such an open air concept. We didn’t spend much time here and we even missed the daily show of Balinese dance. 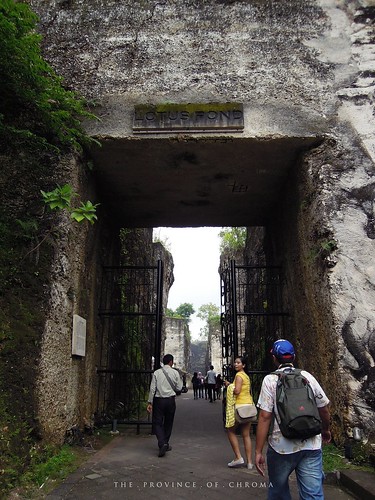 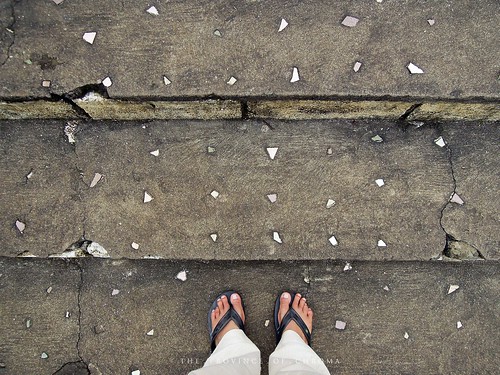 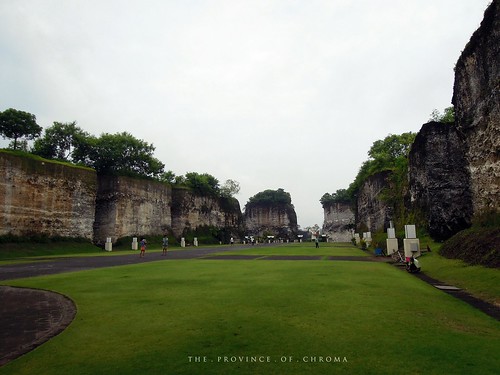 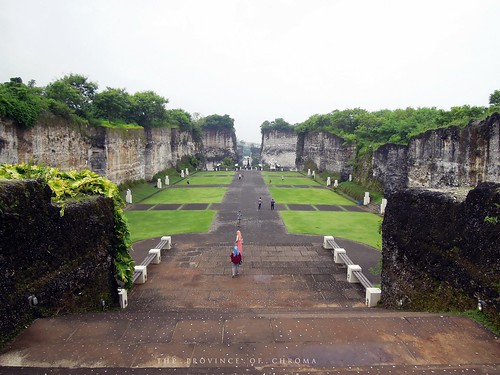 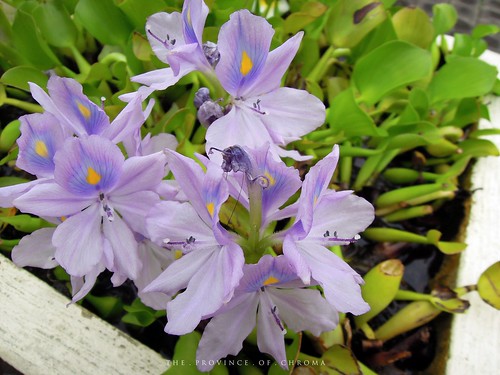 After a long ride passing a few villages, uphill and downhill, we were then welcomed by this beautiful view of Pandawa Beach from the cliff. The view from the top was mesmerized! Couldn’t express further. Not to forget the white sandy beach. This is definitely what we’re looking for in the land of Bali.

The quiet road to the beach 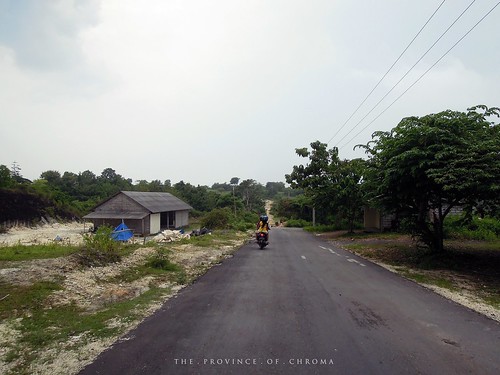 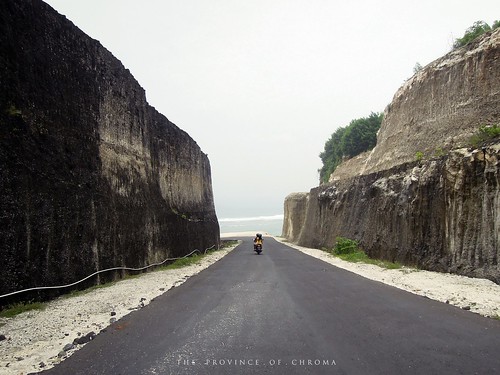 FF and the view from top 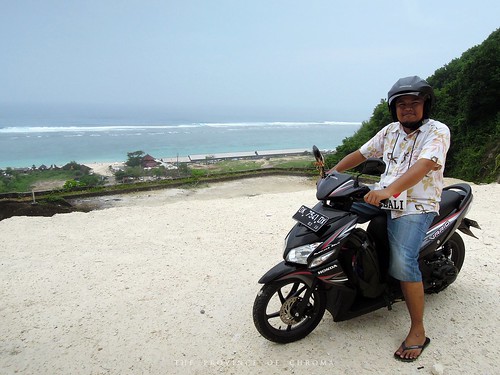 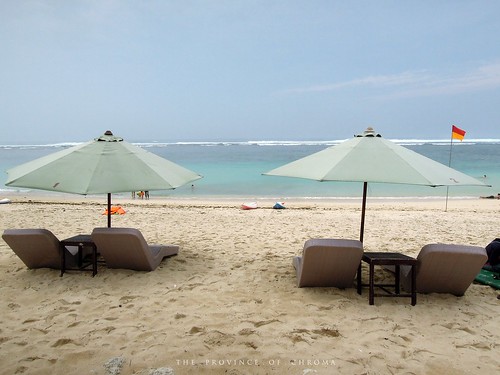 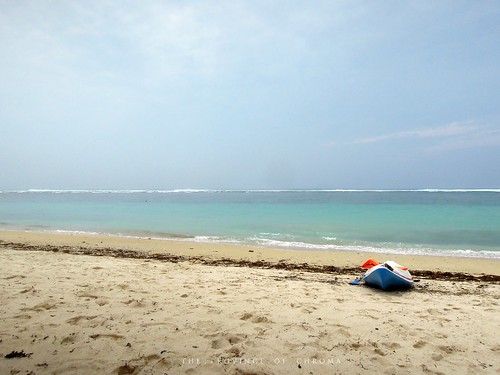 After getting ourself the sea breeze doze, we hit the road again. When we saw the Pecatu Village signboard, we knew that we’re closing to one of the most popular temple in Bali, Uluwatu. As mentioned by local, it is officially known as Pura Luhur Uluwatu. How does Uluwatu got his name? It was derived from the word ‘Ulu’ which mean land end and ‘Watu’ as rocks. The temple is located on the edge of a steep cliff that makes it so picturesque. This is where you can experience a live show of Kecak Dance performance everyday with a beautiful sunset as a background. 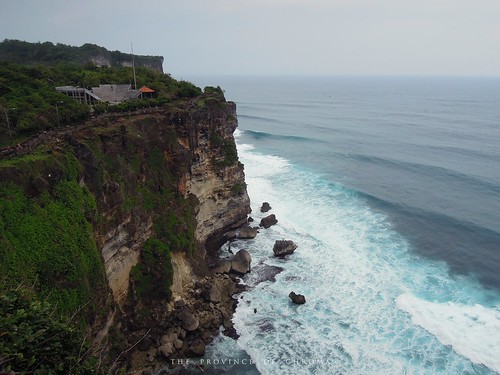 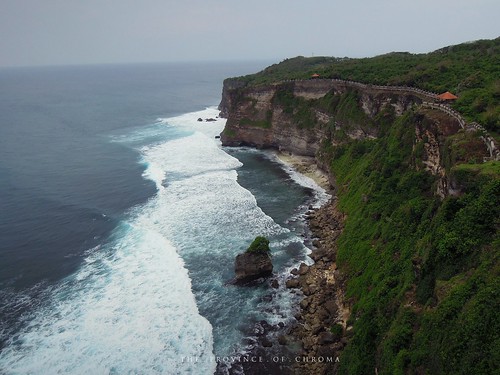 As we’re still within Pecatu Village or South Kuta sub-district, we definitely not gonna miss the rest of the secluded beach that they have over there. Itha then brought us to one of the best spot for surfers in Bali where it offered a world-class thrilling waves. One thing that you should know that getting to the beach is slightly tough. We are welcomed with steep staircases with a path to the crevices all the way down to the cliff. While walking down, we turned back just to remind ourself that we need to climb the staircases up later again. We could feel more sweat coming out from our body. We hope that we’ve made the right decision. 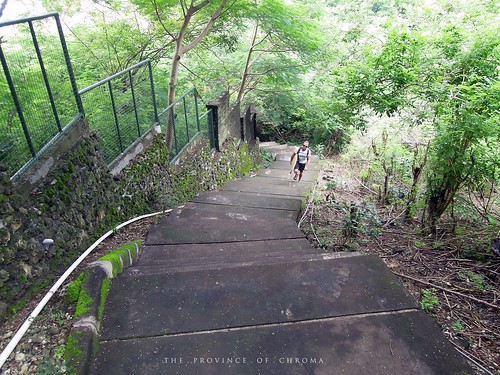 As we approached the area, we were then speechless. We have been greeted with a fascinating scenery of white rock cliffs that stretch along the open sea and not to forget the turquoise blue waters. Plus a beautiful character of waves. Definitely a perfect setting and challenge for a surfing adventure. It was a right decision going down as we could appreciate this beautiful creation by our creator Allah S.W.T. In overall, the beach is blessed with a breathtaking view and a peaceful atmosphere. 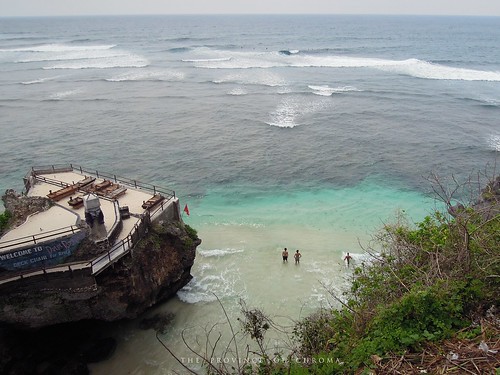 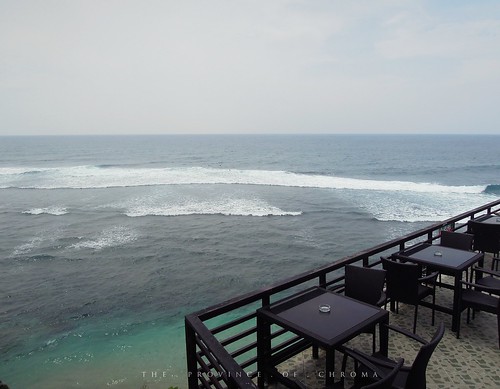 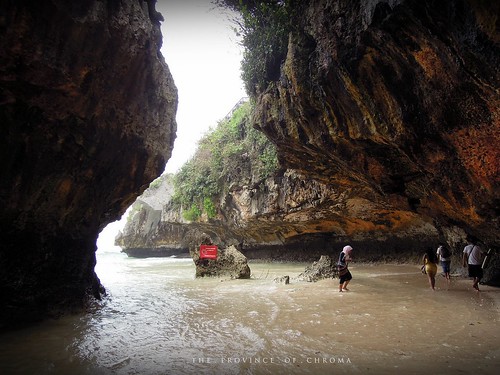 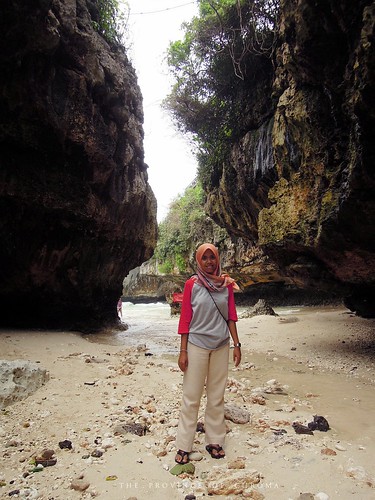 With just 10 minutes of motorbike ride, we then reached at Padang Padang Beach. Another secluded beach which located close to the Uluwatu Temple. It’s a small and beautiful beach covered with huge rocks and small caves around. We decided not to go down to the beach as you need to descend about 100 meter down. Besides being the best ‘hidden treasure’ within the area, Padang Padang Beach is also a best surf spot in Bali. To prove it, this is where the annual event of Rip Curl was held every year. It is not only famous as a surf spot but this is also the filming location of ‘Eat, Pray, Love’ starring Julia Robert. Since then, it became famous and the number of visitors continuously growing.

The only best shot that we had 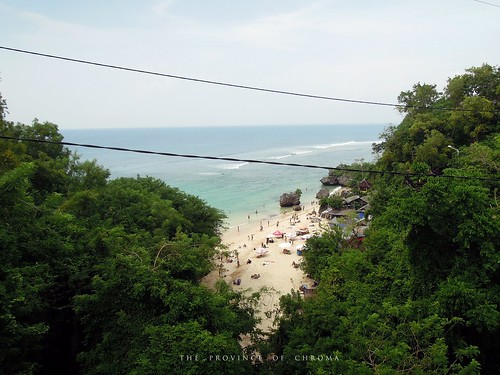 We then decided to get our last chance to get tan here in Dreamland Beach. This beach is located within the Pecatu Graha Development. We were so surprised to see such a big development  on our way to the beach and we just got to know that it was basically a failed development planned by Tommy Suharto, the youngest son of the former Indonesia President, Suharto. What a waste. From our point of view, we could see more local compared to the foreigner. We spent a few hours here where FF just roaming around and I took the chance to chit chat with Itha and Putri. And guess what, we ended up talking about travelling as Itha and Putri is basically a solo female travelers. I guess, we couldn’t get away with the same topic each time.

In overall, Dreamland Beach is a beautiful beach but it was not well maintained. Garbage and litters were spotted along the beach. But still , the huge waves, the white sands, the beautiful cliff, the scorching hot sun but windy is things that it could offered. 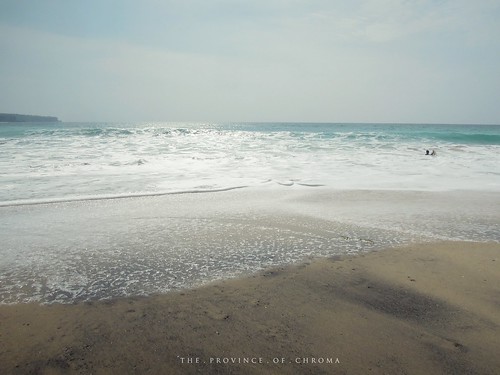 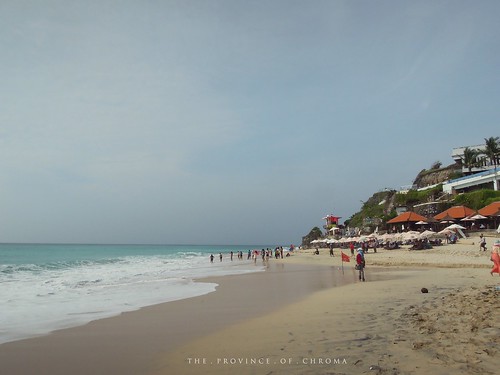 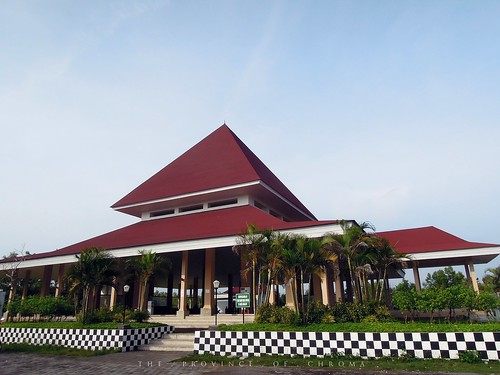 Enough of the beach and the sun. It’s time for us to return to our nest. Itha told us that we will used the newly open 12.7km expressway of Bali Mandara Toll which has been constructed over the sea of Nusa Dua – Ngurah Rai – Tanjong Benoa. The expressway connect the city of Denpasar, South Kuta and Ngurah Rai Airport. This will resolved the traffic congestion on the Ngurah Rai By Pass Road. 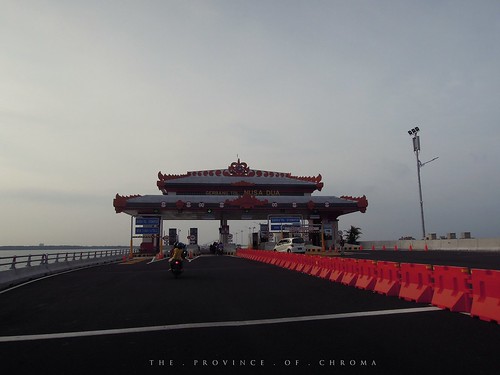 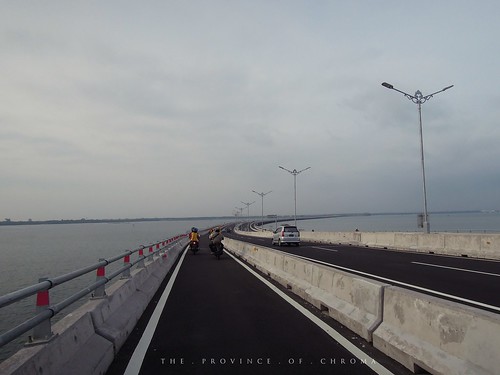 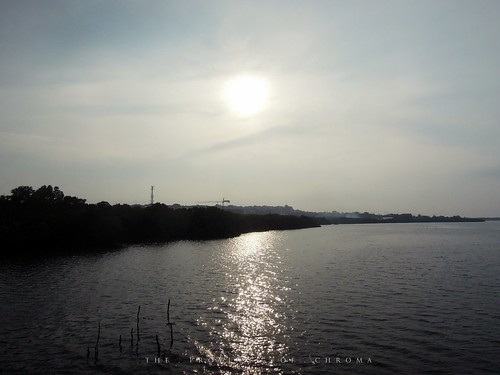 Since we already in Denpasar, Itha told us that it’s a mandatory to visit the place which is the ‘Monumen Perjuangan Rakyat Bali’. It’s also known as ‘Bajra Sandhi’. Our bad that we totally didn’t know what does it mean. Go figure! 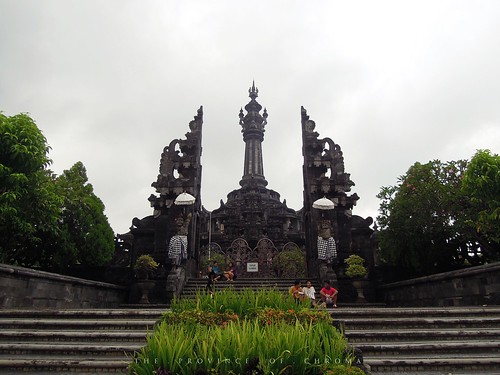 And something did happened right after this. We’ve been separated from Itha and Putri. We couldn’t track them out while we’re on the road. Everything look similar as we’re using the ‘shortcut’ to the place for our dinner. Itha promised us that she will treat us with the famous and delicious fried rice in town. It’s just not our ‘rezeki’. We called them up and no ringing tones. We roamed around asking our way to Kuta but unfortunately everyone were giving us totally a different direction. We decided to follow the local road signages. Everything with ‘KUTA’ word on it but it doesn’t work out as well. Last resort, we stopped at one of the mobile shop and asked for the cheapest sim card that we could buy. We just need the mobile data in order for us to use the Waze apps. Guess what? That IDR 7,500 (RM2.10) sim card save it all!

We managed to reach Kuta safe and sound. We managed to text Itha using the local number and she was so worried that she couldn’t contact me with my Malaysia number. Itha was being so nice where she even called the hotel and waited at the lobby just to make sure that we’re safe. Thanks Itha! You’re the best!

Sometimes, it’s good to get lost of yourself in the new city as travel is all about exploration. Even though getting lost will need a little bit of your time and effort, but the experience is priceless! Some even say that greatest travel stories come from getting lost, or losing yourself in a new place.

After all the trouble, we called it a day!

We will continue our journey on Part 4 soon. 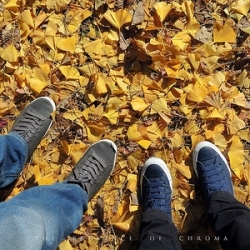